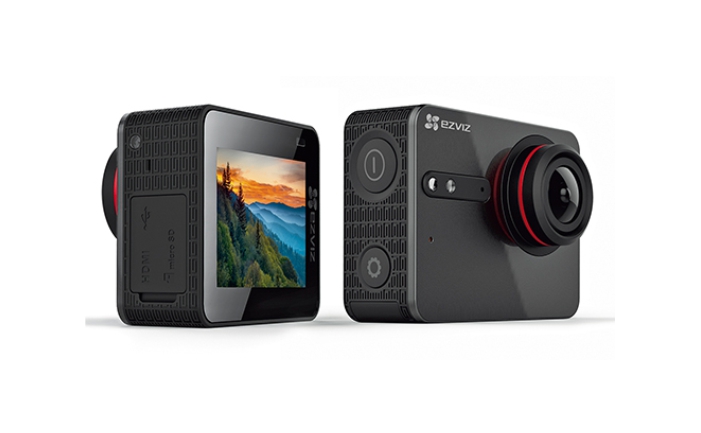 When I heard that I would be getting a new toy to review this month I was pretty excited. Especially when testing out the new EZviz S5Plus meant that I got to be a front seat camera-man for some 4×4 action in the mountainous wilds of Cape Town.


The first thing that comes to mind when seeing the S5Plus is how sleek and simplistic it is. The three button layout makes it really easy to use and it doesn’t take long to figure out how to use them. A few minutes of fiddling and I had this baby figured out. In addition to the sleek design, EZviz also added a screw connector that allows you to attach the camera to just about any tripod or stand, which is great for when you aren’t shooting extreme action.

The thing about the EZviz S5Plus is that its stabilization lacks a little when compared to the GoPro Hero 4 Black, its biggest competitor. However, in every other aspect, this camera keeps up with the GoPro and then some. Coming in at 58mm x 45mm x 22mm in size, this little beast can record continuously at 4k for 90 or so minutes. Although when we tested it out in our office, the S5Plus lasted little over 112 minutes, which was two minutes less than the GoPro Hero 4 Black’s time of 114 minutes.

Despite the S5Plus and GoPro’s similar size, you won’t be able to fit the S5Plus into your GoPro covers. But that doesn’t matter since the S5Plus comes with one waterproof cover, one standard edge cover, one frame adaptor, two stand clips, 2 sticky mounts, one MicroUSB cable and charger, a rubber lens cap, an extra connector and an extra waterproof screen cover in case you somehow manage to break the old one.

The S5Plus shoots in 4k with a wide angle of 158°, it uses the Progressive Scan Sony CMOS sensor and 3mm f2.8 lens to get really crisp shots. Even when filming in a lower resolution the image was still crystal clear, to a certain limit of course, once you dip below 720p things start getting a little grainy. It can also capture up to 240fps for slow motion filming.

Like the GoPro, EZviz’s S5Plus has Wifi and Bluetooth which connects to the EZviz mobile app on your phone, allowing you to control the S5 from a distance. It also sports a 2-inch screen on the back of the camera that allows you to capture and navigate more easily. This is one of the differences between the S5Plus and the S1 , also released by EZviz. This camera supports a 128GB micro card which is more than most other action cameras, including most GoPros, can say.

The only thing I can complain about when it comes to the S5Plus is that you have to remove the camera from its outer casing in order to reach the microUSB 3.0 and microHDMI ports as the cover does not have an opening for you to access them through.

Over all, the S5Plus is a fantastic gadget that does compete with bigger brands in the action camera department. You can find more on the EZviz S5Plus visit this page: EZviz S5PLus